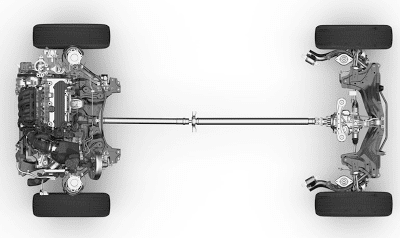 Speaking of winter, consider the fact that 19 of Canada’s 30 most popular vehicles in January are available with a system that drives all four wheels. In the case of the Subaru Impreza and a handful of others, all-wheel drive is standard equipment. The Honda CR-V’s Real Time AWD, pictured above, is not. This doesn’t mean Canadians don’t favour four-wheel drive vehicles in the summer, and it certainly doesn’t mean that 63% of the vehicles on this list (58,795 sales in total) were sold with four-wheel drive systems in January. 19 out of 30 is just an interesting statistic.

Perhaps of greater importance is the desire of Canadians to do as other Canadians do, or in this case, to buy as other Canadians buy. The 20 best-selling vehicles in Canada accounted for 48.8% of all new vehicles sold in Canada in January 2012. That means approximately 7% of the nameplates were responsible for approximately half of all new vehicle sales. Between the Ford F-Series and Honda Civic, more than one out of every ten new vehicle acquisitions were already spoken for.

Not that Natural Resources Canada’s fuel efficiency ratings are accurate, but it is interesting to note that the fuel savings afforded by the Honda Civic, Canada’s number two vehicle, compared with the Ford F-150 EcoBoost 4×4, representative of Canada’s top seller, is over $1000.

Relevant links to other best seller posts can be clicked at the bottom of this post, below a market share chart which shows the dominance of Canada’s 20 best-selling vehicles. Use the dropdown menu at the top right of this page or on the Sales Stats page to access monthly and yearly sales figures for every model on sale in North America. 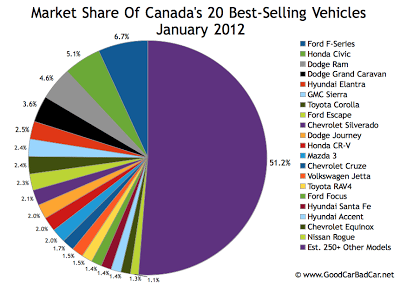