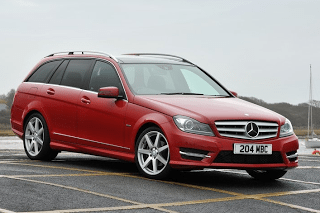 For the second consecutive month Canada’s favourite premium vehicle was a small German car. In February 2012, however, it wasn’t the BMW 3-Series, sales of which tumbled 26% as many customers waited for the new F10 3-Series sedan, a Good 12 winner.

In fact, Canada’s best-selling premium vehicle last month was a 3-Series rival, the Mercedes-Benz C-Class. Perhaps worthy of greater notice is the Mercedes-Benz which took over second spot. The new M-Class is a hot seller both north and south of the border. Here in Canada, sales shot up 153% from February 2011 to 602 units. Audi Q5 sales jumped 19% but the smaller German utility finished February 85 sales back of the ML Benz.

Seven of the ten highest finishers wear German badges; ten of the top 15. The highest selling Cadillac or Lincoln was the MKX in 15th spot, three sales ahead of the CTS. (Oh, for names like Aviator and Catera.) We’ve included the $48,875-$63,685 Volkswagen Touareg, the 21st-ranked premium vehicle, just as we would slot in the Hyundai Genesis sedan were it popular enough, but this doesn’t mean Buick is eligible. The Verano? A luxury car?

There are actually 31 vehicles listed in the February 2012 best-selling luxury vehicles table below. As a result of a tie between the Porsche Cayenne and Acura TSX at 92 units, both earned the 30th spot. For the sales figures of other models, follow GoodCarBadCar.net over the coming days for segment breakdowns. You can always find monthly and yearly sales data for any nameplate on sale in North America by accessing the dropdown menu at the top right of this page.