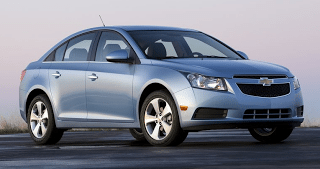 For the second month in a row a Chevrolet is the best-selling car in America. Instead of the Malibu (down one spot to #2 in June), the Chevrolet Cruze took over as the most popular car in the USA. Include 106 leftover Cobalts in the Cruze’s total and Chevrolet’s compact car sales jumped 147% last month. Year-over-year, the Malibu was up 14.6% in June 2011. There were two other Chevrolets in America’s June list of 20 best-selling cars: the Impala (up 13%) and the Camaro (up 12.5%).

To talk up Chevrolet, however, is to ignore the usual suspects. Toyota Camry sales fell 24.8%, Honda Accord sales dropped 36.1%, Corolla/Matrix sales slid 13.7%, and Civic sales plunged 34% even as a new generation should be kickstarting growth. Yep, you can still blame all this on poor dealer supply stemming from March’s earthquake/tsunami/nuclear disaster.

There are four Korean cars in the Top 20, none higher than sixth spot. There are two German cars; the BMW 3-Series and still-surging Volkswagen Jetta. The remaining 14 are evenly split between American and Japanese brands. June’s 20 best-selling cars in America are in the table below.