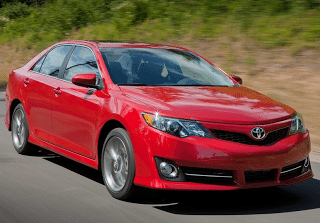 Early images and test drives presented us with one question: did the Toyota Camry evolve enough to maintain its consistent popularity in the U.S. marketplace? Er… yeah. it did.

Camry sales jumped 56% from January 2011, a period you might remember because of what happened to the Camry. It was unseated as America’s best-selling car for the second consecutive month. It was the second-best-selling car in America a year ago, behind another Toyota. From second best at the beginning of last year, a position the Camry is not that familiar with, the midsize Toyota reported a 56% improvement in U.S. sales. That was enough to beat the new second-best-selling car, Nissan’s Altima, by nearly 5000 sales. Yes, Altima sales needed to be 22% stronger.

And what of another former best seller? GoodCarBadCar no longer includes sales of the Crosstour in the Honda Accord’s total. It matters little. The Accord would have moved up only two positions, barely beating out the Sonata and Focus with 14,580 sales. Crosstour sales were down 41% in January 2012. The good news at Honda was Civic-related. The most popular compact car in America in January was indeed Honda’s Civic, sales of which jumped 46%. That increase is nothing compared to what happened north of the border. Civic sales in Canada jumped 333% in January.

On all but a few accounts, the U.S. sales report coming out of General Motors today was bad. Car sales at Chevrolet were more than decent, however. The Impala, Cruze, and Malibu beat all other American cars, including the much talked about surge at Chrysler. All three of these Chevy cars fared better this January than last, as well.

Find monthly and yearly sales figures for all these cars and for any other vehicle currently on sale in North America by accessing the dropdown menu at the top right of this page. Nine manufacturers built the 20 cars you see listed below. They were the 20 best-selling cars in America in January 2012.

Source: Manufacturers & ANDC
Red font indicates year-over-year declining sales
* Prius breakdown by variant
Accord sales are Accord sedan and coupe only, no Crosstour, only 921 of which were sold anyhow.