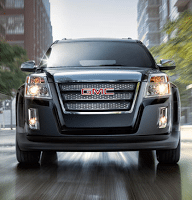 Sales of the Honda CR-V plunged 48% in June 2011 as the popular utility vehicle fell from fifth spot on Canada’s list of best-selling SUVs in May to 12th, 282 sales abaft of the tenth-ranked Toyota RAV4. Sales of the RAV4, by the way, slid 33%. It was one of 19 Toyota Canada products to report lower volume in June 2011 than in June 2010.

Despite a 6% decline in an overall market that grew 7%, the Ford Escape was still Canada’s best-selling SUV in June. With half the year behind us, the Escape leads the Dodge Journey by more than 7100 sales.

Between the Escape and RAV4, the other eight utility vehicles on this list of Canada’s Top 10 most popular SUVs posted year-over-year gains, none better than the GMC Terrain’s 92% bump. Combined sales of the Terrain and its corporate twin, the Chevrolet Equinox, totalled 4213, enough to land General Motors in second spot… exactly where it is right now. Besides the Escape, Equinox, and Terrain, three other Detroit utility vehicles landed on the best sellers list. There were also three wearing Korean badges.