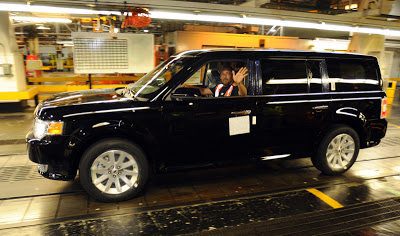 Home
Auto Brands
Chevrolet
Nine different brands contributed utility vehicles to January 2012’s list of the top 10 best-selling SUVs in Canada. The brand with two members just so happened to gain the top spot in January’s best-selling group. The Ford Escape was indeed the top seller, 258 units ahead of the Dodge Journey.

With 14,048 sales between the ten of them, these best-selling crossovers and SUVs accounted for 14% of Canada’s overall new vehicle market in January 2012. The Escape is obviously a dominant vehicle without the assistance of these other vehicles: in Ford showrooms, the smallest Ford utility vehicle out-sold all other Blue Oval crossovers and SUVs combined, and with 406 units to spare.

That said, not only does Ford’s Escape not cast as wide a shadow as the Honda Civic, it’s shadow size slipped a notch in January. Escape sales fell 26% from January 2011. Of course, it didn’t matter, at least not in terms of bragging rights.

Half of Canada’s best-selling SUV list is made up by Detroit Three vehicles. Three of the ten best-selling SUVs are assembled in Canada. Monthly and yearly sales figures for these vehicles and every other nameplate on sale in North America will be made available through the dropdown menu at the top right of this page on an ongoing basis. Pertinent links can be found below the table. For now, waste your time checking out the ten best-selling SUVs and crossovers in Canada. There are no premium brands represented, but this ensemble remains a unique bunch.