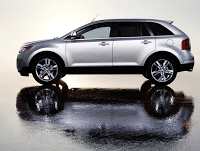 Where only two of America’s 10 best-selling cars in March were badged as American cars, five of America’s 10 best-selling SUVs wear a Blue Oval, a Bow Tie, or a seven-slat grille, including the leading Ford Escape with its 25% gain. Among this group only two members posted lower sales in March 2011 than March 2010: they were both Toyotas. Only one vehicle present in this list of best-selling utility vehicles below wasn’t on the list in February – the Toyota Highlander, and it nearly made it in February. The Highlander replaces the departed Chevrolet Traverse.

The USA’s 10 most popular sport-utility vehicles are not an eclectic bunch. They are purely variations on a theme. With the Explorer’s new-found status as a non-truck-based sport-ute, it can definitely be said that America favours the less rugged utility vehicle design. Call ’em crossovers if you must.