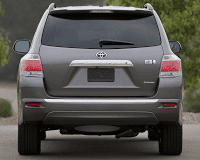 Eight different brands are represented in this list of the Top 10 Best-Selling SUVs In America for October 2010. That’s up from seven in September 2010 and most months before. What’s different? Not a soul should be surprised to discover that every utility vehicle segment is levelling off. Everybody and their dog is selling some sort of SUV or CUV or crossover these days. Many of them are bound to be competitive, if not the ones engineered by dogs then the ones done with AutoCAD.

There’s not a lot of off-road capability in this bunch. Most people interested in the 2011 Lexus RX350 have no intention of doing anything more than crawling a curb. The Nissan Rogue and Chevrolet Equinox are about as rock-hop ready as the Nissan Sentra and Chevrolet Malibu. And the 2010 Honda CR-V? It seems to want to avoid all sorts of confrontation. This basically leaves the all new 2011 Jeep Grand Cherokee, an SUV capable of fording rivers in slow motion.

On-road, however, these ten most popular utility vehicles make regular three-box family cars seem low and lacking in versatility. For the record, Toyota RAV4 sales for the calendar year-to-date stand at 141,085. The Ford Escape is out in front with 157,398 and the Honda CR-V is in the #1 spot with 162,326 sales.