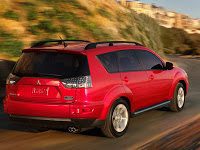 The Subaru Forester surged forward from 686 sales in October 2010 to nearly overtake the Honda CR-V with 955 November sales. There were 25 selling days in November: Subaru sold 38 Foresters per day. In October, there were 25 selling days, as well. Subaru sold 27 Foresters per day. With somewhere around 90 Subaru dealers in Canada, each dealer was able to sell about 10 Foresters in November, on average, a pleasing two or three car jump from October levels. Toyota has nearly that many dealers in Ontario alone. Of course, Toyota dealers have the privilege of selling popular vehicles other than the RAV4 – the Highlander being a good example – while Subaru dealers must fend for themselves off the Outback, Legacy, Impreza, and… ahem… Tribeca. But it’s interesting to see what Subaru Canada can do with a relative handful of dealers.

Of course, Mitsubishi dealers were able to sell about 22 Outlanders each, on average, in November 2010. Charging headlong into a North American trend which says the Outlander shouldn’t be successful, Mitsubishi Canada found 872 buyers in November. The attractive Outlander found just 888 buyers in the United States last month, that’s in a market which is more than seven times the size of Canada’s.

The 2011 Mitsubishi Outlander starts at $25,498 in Canada and $21,995 in the USA. That Canadian base price is $903 more than the starting MSRP of the 2011 Toyota RAV4. Perhaps worthy of remembering is the tremendously successful Hyundai Santa Fe, another Asian vehicle which normally goes unmentioned in this group of Japanese best-selling utility vehicles. Hyundai sold 2231 Santa Fes in November. (Kia sold 1236 Sorentos.) The 2011 Hyundai Santa Fe has a base price of $22,999.