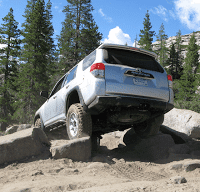 Two of these vehicles were in The Good 12 Supersize last year. The problem they face is the lack of a supersized version of The Good 12 this year, there are only 12 spots for all vehicles, not the 24 total from last year. Subaru Forester, Toyota 4Runner: apologies in advance for your dismissal.

There was no doubt when the 2010 Toyota 4Runner was released that it was going to be a renewed hit. The dramatic 140.5% increase in November 2010 is no surprise. The 4Runner has actually slipped in the context of the most popular Japanese SUVs in America, but sales are way up from last November and should be able to remain steady for some time. The Toyota Highlander also possesses renewed vigor, handing the Honda Pilot its lunch. Take note of the 2011 Nissan Juke not on this list – Juke sales in November were 3373, up from 2103 in its first month on sale, October.

These are the ten most popular Japanese SUVs and crossovers in America from November 2010.