In April, as well as in the first four months of 2010 as a whole, the Mazda 3 is selling at a prodigious rate in Canada. No, Mazda 3 sales do not exceed that of the Dodge Grand Caravan or the Ford F-Series, but Canada’s perennial best-selling car, the Honda Civic, is trailing the Mazda 3.

It’s a curious thing, really. The Mazda 3 suffers from a chronic smile, but apart from that it’s a wonderful little car in sedan or hatchback form. The Civic meanwhile, even many years into its lifecycle, is still an excellent small sedan or coupe. Both cars offer a sporty iteration, the MazdaSpeed 3 and Honda Civic Si. Yet south of the border, Americans clamour not for the Mazda 3, their devotion is to Honda and Canada’s third ranking best-seller, the Toyota Corolla. The Mazda 3 doesn’t even crack America’s Top 10.
Good for Canada. We’re Americanized enough – let’s build the reputation of Mazda’s 3 on our own. Like most other months, the 3‘s direct competition fills up Canada’s best-seller list. Only the Hyundai Accent (from the segment below) and the Ford Fusion (from the segment above) do anything to stop Compact Car Sales from appearing as the only kind of car sales in Canada. 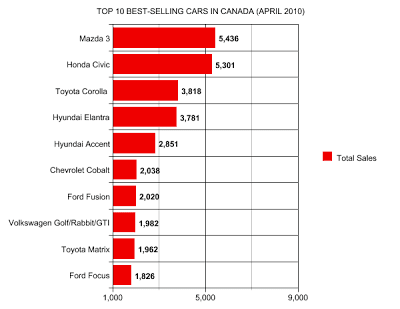