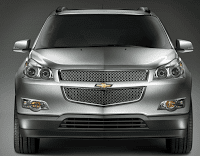 Number three overall in the USA in October 2010, the Ford Escape still stands out as the most popular American utility vehicle in America. Larger, more traditional SUVs still form a surprisingly strong contingent among America’s Top 10 Best-Selling American SUVs – vehicles like the 2011 Jeep Grand Cherokee and the $37,570 2011 Chevrolet Tahoe – but car-based softies like the Escape, Chevrolet Equinox, and GMC’s Terrain make up the majority of U.S.-derived utility vehicles.

There’s no denying the success of GM’s Lambda platform quartet trio. The Saturn Outlook may be dead but the Good 12-winning Buick Enclave, Chevrolet Traverse, and GMC Acadia all out-sold the Ford Explorer and Ford Flex on an individual basis in October 2010. Combined, the Lambda platform trio’s sales outweigh any SUV in America in October, even the Honda CR-V.