Imagine General Motors suffering an 82% drop in sales over the course of the last decade. You know what this would do to the U.S. car market? For one thing, it would’ve meant GM only sold 875,279 vehicles in America in 2010 instead of the 2.2 million the conglomerate actually sold. But, tragically in a purely hypothetical fashion, an 82% decline over the last decade would have placed the city of Detroit in an even worse state of affairs. Through all of this, it’s worth noting that the market as a whole has decreased by 33% since the 2001 calendar year.

Despite the market’s overall decline, the Graph below showcasing Mitsubishi’s drastic downfall since 2001, or even 2002, as well as Suzuki’s sharp cliff-dive after 2007, doesn’t mince facts. In fact, trends and lines and numbers like you see here should cause even the most casual observers to wonder why Mitsubishi and Suzuki maintain a presence in the United States. And how the two Japanese companies maintain a presence.

The second chart below compares Mitsubishi and Suzuki with other Japanese auto brands. Of the 4,475,698 Japanese cars sold in the United States in 2010, more than one-third were Toyotas; approximately one-quarter were Hondas. Mitsubishi’s market share – and remember, this is just among Japanese vehicle sales – was 1.2%; Suzuki’s just 0.5%. On the market as a whole, Suzuki’s market share was as high as 0.6% in 2007 but stands at just 0.2% at the end of 2010. Mitsubishi possessed 2% of the whole U.S. new vehicle market in 2002 but held just 0.5% in 2010. 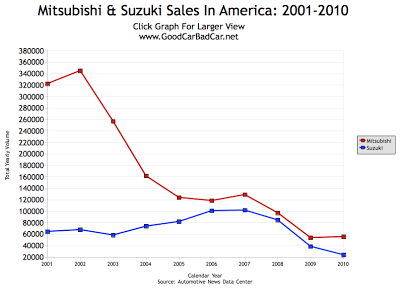 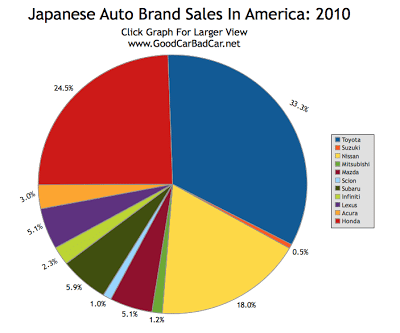 The 2010 Suzuki Kizashi appeared to be a signal that the famous motorcycle manufacturer wasn’t giving up on the North American automobile marketplace. Of course, observers and analysts wonder if the Kizashi’s failure has caused Suzuki to at least consider throwing in the towel. Mitsubishi, on the other hand, wants to start assembling more vehicles at its Illinois plant in 2012 or 2013. That doesn’t sound like surrender. 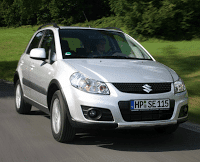 For a little perspective on Mitsubishi, consider the prices of its least and most-expensive cars. The 2011 Mitsubishi Lancer has a base price of $15,195, the 2011 Mitsubishi Lancer Evolution starts at $33,995. In between these two Lancer variants are a midsize SUV, a small SUV, an urban-runabout SUV with basically the same name as the small SUV, an ugly convertible and its ugly coupe twin, a midsize sedan, and a Lancer-based hatchback.

Suzuki waters are not unmuddied. There’s a Nissan Frontier-based pickup truck, the Equator. The Grand Vitara is a ladder-frame unibody competitor for America’s best-selling utility vehicle, the Honda CR-V. The $13,499 2011 Suzuki SX4, particularly as the $16,999 SX4 Crossover variant, is a rebadged Fiat Sedici. Yep, the Fiat that now runs Chrysler. And then there’s the aforementioned Kizashi, a handsome sedan wearing the badge of a brand that’s never been able to remotely succeed in marketing midsize sedans to Americans before.

Is there hope for Mitsubishi and/or Suzuki? Check out the forward-thinking Mitsubishi i and the not-for-North America Suzuki Swift Sport as evidence that these two companies, or at least departments within these companies, have a clue.