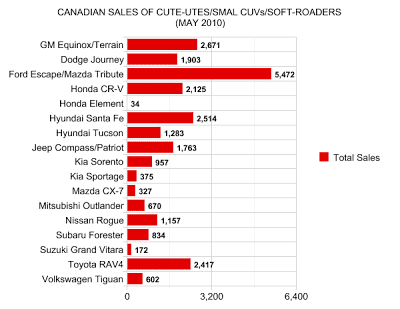 Home
All Vehicle Rankings
SUV Sales
Small SUV Sales
As a result of the onset of summer and a much busier schedule for The Good Car Guy, July 5th marked the point at which multiple Graphs would be combined for the sake of brevity. This means less analysis, but you still get all the data you crave. Now, for Canada’s May 2010 auto sales, the condensing of segments begins again.

Today, the talk is of SUVs and crossovers. In mainstream segments – small, midsize, and large, Ford and General Motors are teaching lessons on selling taller vehicles. Lesson #1: lower prices on aging SUVs. Lesson #2: offer huge incentives on every SUV and crossover. Lesson #3: make sure new CUVs and SUVs are really good.

The Ford Escape, Canada’s best-selling utility vehicle, obviously leads the small segment. What’s surprising is it’s complete and utter dominance so many years into its life cycle. When combined with its platform-mate, Mazda’s Tribute, the duo sold more than double the volume of any other SUV or crossover in Canada.

Not quite as dominant in the midsize category, the Ford Edge still manages to wipe the floor with its competition. Also take note of Ford Flex sales: in the USA, the Flex has almost been forgotten. In Canada, the Flex was the second best-selling midsize crossover in May.

If you’re gonna go big, go really big. Among large SUVs, the jumboist of them all was the greatest seller in May. Chevrolet’s Suburban is an icon among large sport-utility vehicles, a family hauler/trailer tower/moving helper of epic proportions. 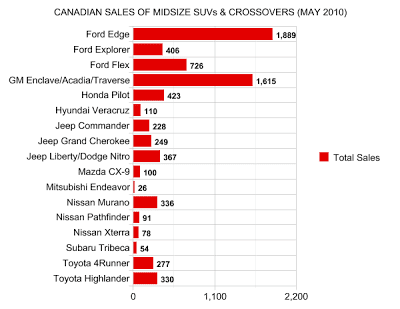 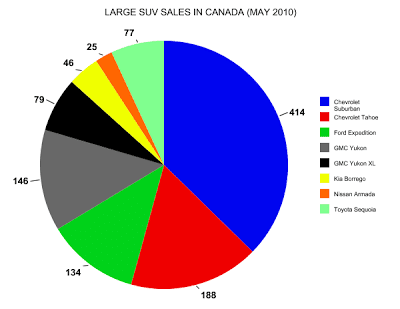