One of the first things you probably heard about the Hyundai Veracruz was its victory over the 2008 Lexus RX350 in Motor Trend magazine. You’d think this would result in enormous amounts of positive attention on the part of the U.S. midsize SUV/crossover-buying consumership. Alas, for Hyundai, the Veracruz has never gained traction in the Marketplace the same way their Santa Fe, Sonata, or even Genesis has. On average, a month goes by and the typical Hyundai dealership doesn’t even sell two copies of the Veracruz.

The 39.2% drop in Veracruz sales from May of 2009 to May 2010 is particularly strange in light of Hyundai’s sales growth with the two other upper-crust Hyundai models. Genesis sales were up last month, Sonata sales skyrocketed. yet consumers are very attracted to the Ford Edge these days; the Chevrolet Traverse; and the Toyota Highlander, too. Could a reengineered Veracruz compete like the Sonata does with the Accord and Camry? Or is it best if the Hyundai Santa Fe becomes a verifiable midsize competitor in its next iteration? The fact that Ford Edge sales were 21.5 times stronger than that of the Hyundai Veracruz in May says something ought to change. 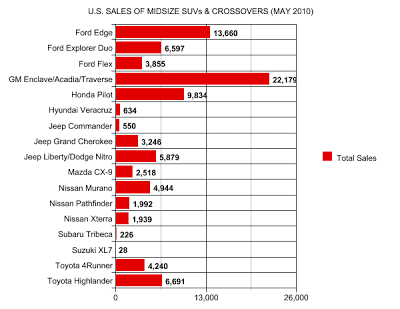