When tabulating 2010’s sales figures for sports cars and roadsters and vaguely sporty cars and distinct muscle cars, it quickly became obvious that six vehicles separated themselves from the pack. Be clear, most vehicles in the first Graph you see below aren’t direct rivals. The black and blue and red lines only signify the vehicle’s nation of origin. It’s not fair to say that the Dodge Challenger “pulled away” from the Volvo C70, and if it is fair, it’s not relevant.

Nevertheless, six sporting machines were truly wildly successful in Canada in 2010, others not so much. Chevrolet Camaro sales were up 67.9% over an incomplete 2009. Dodge Challenger sales rose 19.2%. In the face of challenging opposition from the new Camaro, the Ford Mustang hung on as Canada’s favourite sporty car and lost just 1.9% of its sales. Volkswagen GTI sales shot through the roof, up 117% from 2009. Hyundai Genesis Coupe sales, meanwhile, jumped 29.3%. There are two-doors not on this list, most notably the BMW 3-Series. There are very sporty machines not present here, the Honda Civic Si being one of the more famous examples. To buyers of those cars and the new owners of nearly 26,000 sporty vehicles shown below, thanks. The roads of Canada would be much less interesting without your purchases.

Oh, but there’s more. 525 Canadians bought some version of the Porsche 911, a small increase from 2009. 137 more Audi R8s are parked in Canadian garages after a year in which Audi posted a small decrease of 15 units. By New Year’s Eve of 2010, 476 copies of the Audi R8 had been sold in Canada since the model debuted. That’s not bad at all.

Perhaps of even greater interest to the automotively-enthused, Automotive News estimates Lamborghini Canada sales jumped 103% to 67 in 2010 while estimates for Ferrari show a 9.1% increase to 96 sales in 2010. 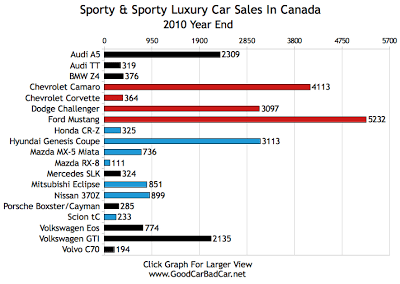 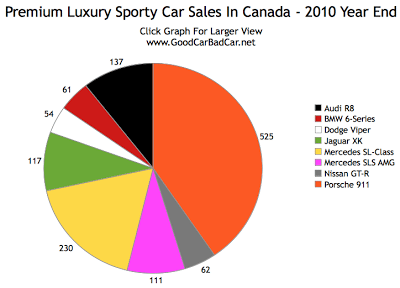