13 Canadian residents took possession of a 563-hp, 479 lb-ft V8 in March, a V8 ensconced in a gullwing body with a blunt, Mercedes-Benz-badged nose and AMG lettering on the trunklid. Love it or loathe it, the Mercedes-Benz SLS AMG has the sort of presence a regular SL-Class Benz (18 March sales, down 25%) could only dream of carrying.

Don’t let yourself believe that Nissan GT-R sales are so low because its price is so high. The SLS AMG is twice as expensive, an Audi R8 is between 45 and 75% more expensive, and the naturally-aspirated Jaguar XK is similarly priced. No, the Nissan GT-R is no longer selling because those who wanted one got one and nearly every other buyer with $100,000 wants a premium badge. GT-R sales were off 88% in March and are down 79% year-to-date.

The GT-R wasn’t the only sporting Nissan car with falling sales in March. The $40,898 2011 Nissan 370Z and $47,398 370Z Roadster dropped from 123 sales in March 2010 to just 45 in March 2011. Sales of the 370Z’s value-oriented competitor, the Hyundai Genesis Coupe, also dipped, but not nearly as badly. While the 4-door Genesis suffered a decline of 42%, the Genesis Coupe was down 18%. Amidst all the talk of Hyundai Canada’s best ever month, only the Elantra and Sonata (and obsolete Entourage) posted year-over-year improvements. The Accent, Tucson, Santa Fe, Veracruz, and Genesis duo lost a combined 1086 sales last month.

As for the greatest gains in the first chart you’ll see below, those were put up by the Mazda RX-8 (up 400%) and Audi TT (up 32%). The Mitsubishi Eclipse was level at 49. All other posted declining sales. 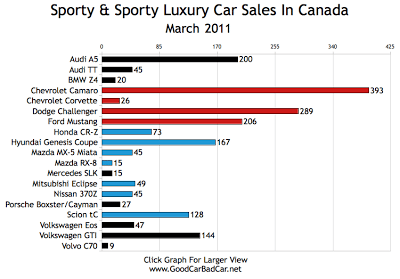 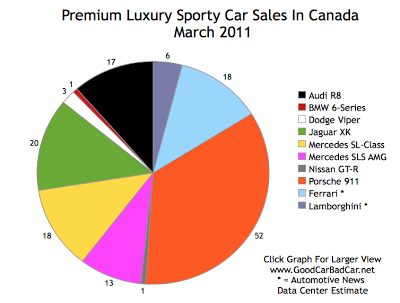