17.5% of Jaguar equals….. not very much. Although in the case of the handsome Jaguar XK, 17.5% of Jaguar’s Canadian output (it equals 14 April sales, by the way) was enough to beat the BMW 6-Series in the pie chart below, in addition to the Dodge Viper and Nissan GT-R. Overall, Jaguar sales grew from 74 in April 2010 to 80 in April 2011. The XK posted growth of one unit. The XJ limo, meanwhile, was up to 30 sales from 2. Blame the XF – and the lack of a luxury crossover, I dare say – for Jaguar’s inability to grab more than 0.57% of the luxury auto market in Canada last month.

In April, Mercedes-Benz Canada made its $198,000 quasi-SLR McLaren replacement twice as popular as the $96,500-$114,000 Jaguar XK. Mercedes-Benz sold nearly one SLS AMG per day last month. That’s more than the whole ranges of Ferrari and Lamborghini combined. It’s nearly enough to out-sell the SL-Class Benz. It’s seven sales up on Audi’s visceral R8 and Mercedes-Benz’s own (soon-to-be-replaced) volume roadster, the SLK. 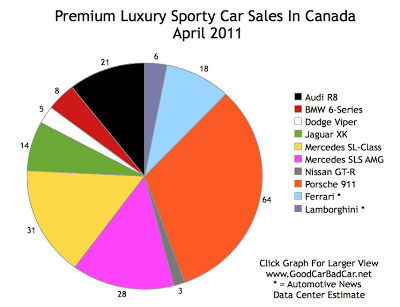 We’ll let the earlier SLK mention segue us into an analysis of the following Graph. Obviously this chart excludes unreported coupe sales from the BMW 3-Series and Honda Civic Si range, among others, but it remains a fairly comprehensive look at the sales impact of sports cars and sportyish cars in Canada. 46% of this market is taken up by American muscle cars. The Chevrolet Camaro led the way in April despite a narrow 1.5% decline. Dodge Challenger sales slid 34.2%, enough to take it from top spot in the category at this time last year to third in April 2011. The Ford Mustang, a Good 12 winner in efficient and affordable V6 trim, posted a 72.8% increase.
Year-to-date, Camaro sales stand at 1164; Dodge is at 914 with the Challenger; the Mustang’s at 889; and the still wildly popular Audi A5 has found 729 new owners. South of the border, the Chevrolet Camaro was America’s 15th-best-selling car in April. The Mustang was 24th. 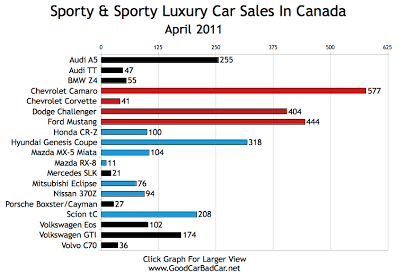