Accentuated by the severely declining sales of BMW’s Z4, the Mercedes-Benz SLK, and Porsche’s Boxster and Cayman, the Audi TT’s halfway decent 23 sales (down 14.8% in February) were class-leading in the second month of 2011. The 2011 Audi TTS starts at $57,900.

Talk about serious declines: Ford Mustang sales fell 63.1% in February to 79. That’s some way below the Chevrolet Camaro. The Camaro was down 58.4%. These two events opened up the way for the Dodge Challenger and its 150 sales to lead the way among American muscle, despite the Challenger’s 24.2% decline from February 2010. Other than the Mitsubishi Eclipse, Mazda RX-8, Chevrolet Corvette, Audi A5, and two cars that weren’t on sale in February 2010, every sporty car in the first Graph you’ll see below suffered from falling sales in February 2011.

Declines weren’t the story of the month among the more premium machines. Although gains were generally slight (and nonexistent in the case of the Audi R8 and BMW 6-Series), the segment didn’t endure, in the manner of Ford Mustang sales, a disappearing act in February. Because of incomplete sales reports we can’t take into account the wide-ranging set of competitors with which the Porsche 911… er, competes. That said, based on the information we have, the 911 was worth one in every two premium sports car sales in Canada last month. 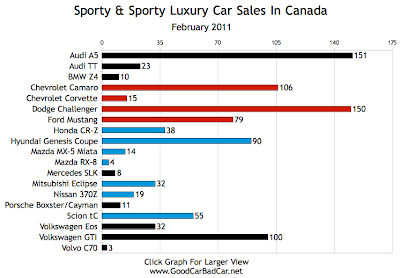 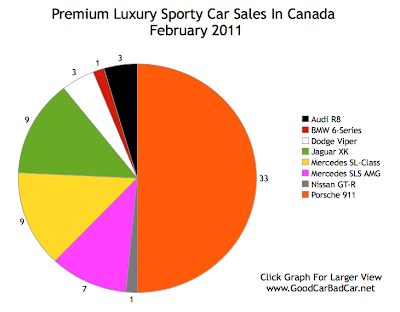