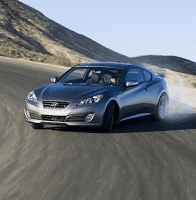 Let’s keep it purely factual for a few moments. Audi R8 sales dropped 29% – that’s two units – in January 2011. Porsche 911 sales dropped 45%, a more noticeable ten unit drop. BMW 6-Series sales disappeared, but there’s a good reason for that, or else it would’ve played itself right off the Graph. Dodge Viper sales went from three in January 2010 to 2 in January 2011. The SL-Class Benz’s 29% decrease allowed the SLS AMG to move in ahead of the SL550 and its more powerful brethren. Jaguar sold only the one XK in January 2010. Quadrupling such a total one year later wasn’t too difficult. Not all these cars are direct competitors, so when The Good Car Guy says they all should’ve bought the Audi R8, don’t take it too seriously. As for the 6-Series’ good reason, well, it’s a low-volume car in a small market and the second-generation is done for as we wait for the third-gen 6-Series to kick in.

Perhaps of some surprise to casual observers of sports car sales data, the Audi A5 was out-sold by only one other sporty car in January. A5 sales were down 19% but the Dodge Challenger’s 43% drop and Chevrolet Camaro’s 52% plummet paved the way for a nice finish for the Audi. The 354-horsepower 2011 Audi S5 is priced from $59,900; the 412-horsepower 2011 Ford Mustang GT starts at $38,499. Not initially believed to be direct rivals at all, I spoke to one BMW salesman who continues to meet potential 335i buyers who’ve been looking at the 412-horsepower Mustang V8. Thus, it’s conceivable that the Mustang is perceived by some Audi buyers to be a viable subsitute.

Sales figures for all sporty, sporting, and all-around sports cars on sale in Canada in January 2011 are listed below. 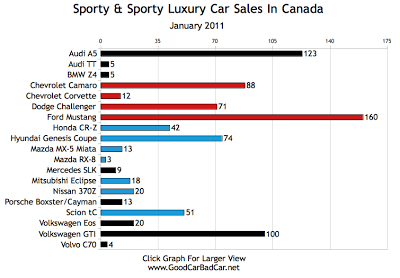 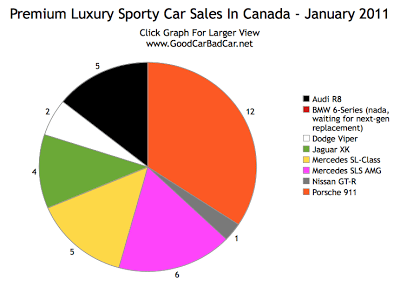