As a testament to the power of GoodCarBadCar.net readers, The Good Car Guy has ended the publishing of separate American Muscle car sales and folded the Chevrolet Camaro, Chevrolet Corvette, Dodge Challenger, Ford Mustang, and Dodge Viper into the Graphs below. It seems some people are very sensitive to seeing their beloved automobile categorized with or without the vehicles they felt it opposed. Thus, fewer charts by The Good Car Guy are made but the Graphs which are made are more thorough.

It shouldn’t surprise a single reader to see the 2011 Ford Mustang chuggin’ along as if there’s no tomorrow. Buyers who want Mustangs want Mustangs now and see no reason to wait. One class of cars everyone seems to love but few seem to partake in sees total sales of just 624; average sales of just 124.8/model in October 2010. The Audi TT’s struggles are particularly apparent, but it’s not as though the remaining three parts of Germany’s sports car quartet are doing much better. The Good Car Guy’s recognition of the Porsche Boxster Spyder can’t exactly push the Mercedes-Benz SLK over the top.

Oh, and the Porsche 911 made every other expensive sporting machine appear tremendously unpopular in October in the United States. The same thing happened in September 2010, and most every other month in recent memory. 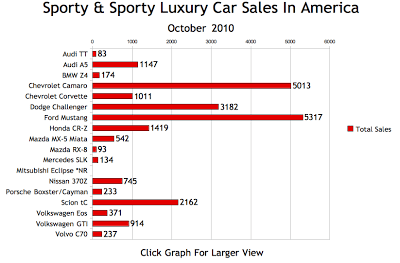 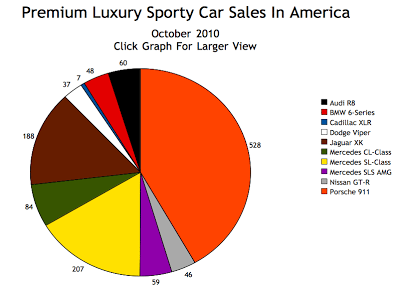