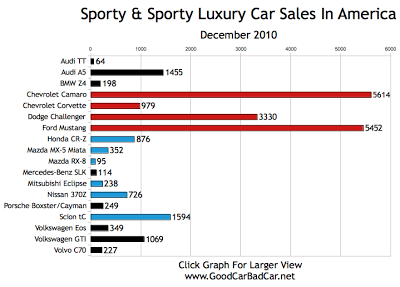 Home
All Vehicle Rankings
Sporty Car Sales
There are two possible angles to covering the Audi sports car sales story. Here’s the first: the Audi R8 isn’t supposed to sell in large volumes, and though you may argue that 119 sales doesn’t constitute large volume status, you should remember that the R8 costs no less than $114,200 and sells in numbers similar to the whole 4-car Ferrari range. Here’s the second angle: the Audi TT isn’t supposed to be an ultra-mega-niche-volume car. Of course, the TT isn’t the type of car that’s going to sell with Toyota Camry-like figures, but the TT should at least seem competitive with the BMW Z4 and Mercedes-Benz SLK. Yet lately, it has not, as The Good Car Guy explained last month.

On a final Audi-related note, you have the Audi A5 and S5, a shockingly effective combo that made successful cars like the Volkswagen GTI and Nissan 370Z seem unpopular in December 2010. U.S. sales of the A5 nearly reached 1500 in December, a spectacular level for a sporty German coupe priced from $36,900. So the TT’s lack of current popularity has nothing to do with its four-ringed badge. U.S. pricing for the 2011 Audi TT starts at $38,300.

In other news, Cadillac XLR sales dropped 97.7% to 1 in December 2010. Porsche Cayman sales were off 46%, down to 112. The Chevrolet Camaro topped the Ford Mustang in the final month of the year, as well. 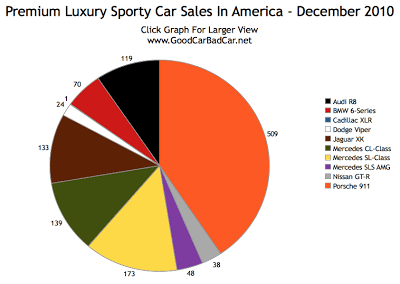