A new Mercedes-Benz SLK roadster has debuted. Retrospectively, however, the SLK doubled its January volume from 2010 to 2011. Nevertheless, these remain seriously niche market cars; the BMW Z4, Audi TT, Porsche Boxster, and Porsche Cayman included. Combined, those five cars were out-sold by another German, the sweet Volkswagen GTI, by more than 200 units in January. True sports car volume is found in the domestic alternatives, the big-engined Detroit cars produced by Chevrolet, Dodge, and Ford.

Along with the Viper, other somewhat exotic cars enjoyed a nice uptick in winter sales. The Mercedes-Benz SLS AMG wasn’t on sale in January 2010, but its 70 sales represent a 45.8% increase on the previous month. As you may have (not) already noticed, the Cadillax XLR is missing. Cadillac didn’t sell any copies of their most expensive product, which is no longer listed on Cadillac’s website. You’d be better served by the $63,465 2011 Cadillac CTS-V Wagon anyhow. 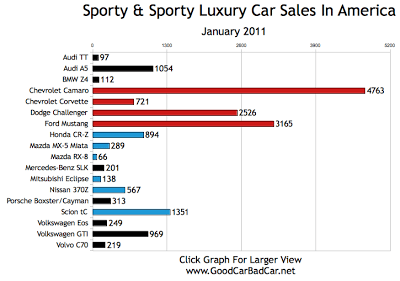 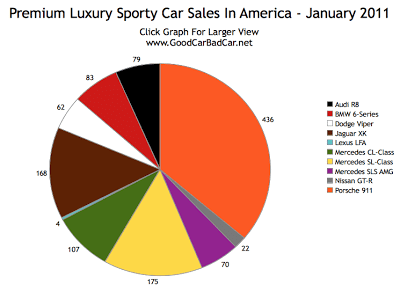