Six sporting cars out-sold the Honda CR-Z in the United States in February 2011. One of those six cars was the recently refreshed Scion tC, sales of which were up 93% over February 2010. The CR-Z wasn’t on sale a year ago, but compared to January 2011, sales were up 22%, parallel with the overall passenger car market. Sales of this broad segment’s leader, the Chevrolet Camaro, were down 4% from February of last year. At the same time, Chevrolet Corvette sales rose from 624 in February 2010 to 955 a year later.

Mercedes-Benz USA sold 378 high-end 2-doors in February, 22% of which were SLS AMGs. The Gullwing Benz easily out-sold the Jaguar XK and Nissan GT-R last month. Not shown in either of these Graphs are the forgotten Mercedes-Benz CLK-Class and Lexus SC, both of which found a single buyer in February.

Then there’s the much-loved Audi R8. Though no Porsche 911 in terms of U.S. market popularity, R8 sales are more than a little awe-inspiring for a car with a starting MSRP of $114,200. Audi R8 sales jumped 176% in February 2011 and fell in only 31 units behind the oft-ignored Audi TT, another GoodCarBadCar.net favourite.

Automotive News Data Center estimates that Ferrari sold 131 cars in February; Aston Martin another 67; Rolls-Royce sold 44; Lamborghini sold 27; and Lotus 19. All those figures represent an increase, all but Aston Martin which, estimates, sold 70 vehicles in February 2010. 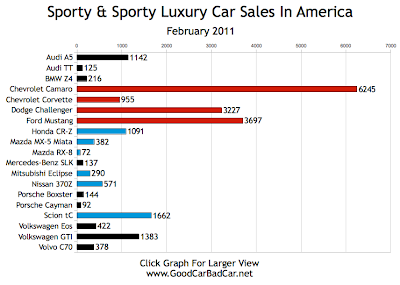 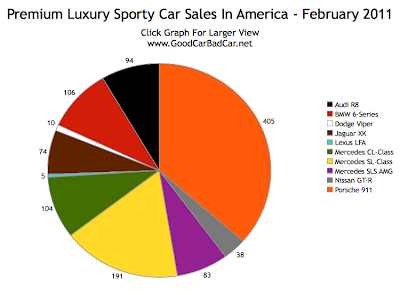