There’s three extra bits of info in March 2011’s U.S. Premium Sporty Car chart. Estimates for three sporting car manufacturers, as generated by the Automotive News Data Center, are shown in the fullest sense available alongside the Porsche 911 (down 1% in March) and the Audi R8 (up 103.8% in March). Relatively speaking, Ferrari sells a lot of cars.

For those of us without $200,000+ to spend on a new 2-seater, we have the first Graph. Way out in front, the Chevrolet Camaro and Ford Mustang posted respective year-over-year improvements of .07% and 46.8%. Combined, the Camaro, Mustang, and Dodge Challenger – America’s muscle car trio – performed better than all but 14 automakers in terms of overall March volume. Put another way, total American muscle car sales volume in the United States in March was greater than that of the whole Lexus brand, greater than the Chrysler brand, greater than Infiniti and Audi combined. Put another way, the Dodge Challenger wasn’t half as successful in March as either the Ford or Chevrolet.

Oh, and Mazda sold 61 RX-8s. That’s down 51.6% from March 2010. It’s sad when such a sweet handler doesn’t have the power or economy to compete; sadder still when it’s attractive yet still in desperate need of a fresh design. 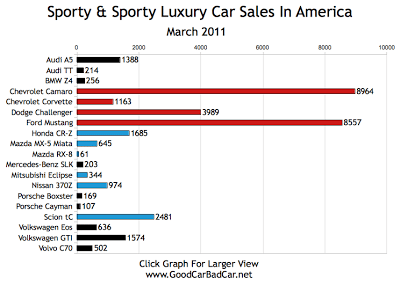 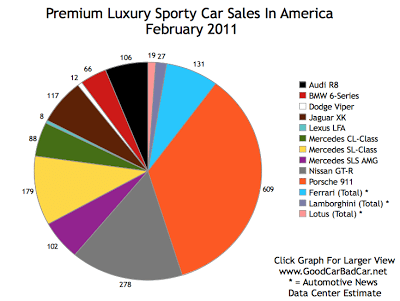