Despite being down 6.5% through the first third of the year, Volvo C70 sales shot up 71.6% in April 2011. After staring at the terribly unattractive roof arrangement of a Lexus IS C outside the grocery store yesterday, the first representative I could think of for positive hardtop convertible roofing was the Volvo C70. 695 fortunate new owners now get to enjoy the C70’s beautifully integrated top for the foreseeable future.

While not a big volume car like the Chevrolet Camaro or Ford Mustang, the C70 was far less of a niche player than the Audi TT, BMW Z4, or Mercedes-Benz SLK last month. Sales of those three German vehicles totalled 648, 47 fewer than the single Swede’s output. There are a handful of convertibles not featured in GoodCarBadCar.net’s sporty car charts because their sales are rolled into one figure: BMW’s 3-Series coupe and hardtop convertible, Trollhättan’s $45,080 2011 Saab 9-3 Convertible, and the Lexus IS C are three examples. The C70 was Volvo’s fourth-best-selling nameplate in the U.S. in April, trailing the S60, XC60, and XC90.
Lexus, BMW, Audi, and Mercedes-Benz all offer higher-end options for heavily-walleted customers; Volvo does not and has no plans to. An overly simplified profit calculator would say that Audi sold 201 TTs in April and, assuming every TT sold was a base model, Audi took in $7,698,300 in TT-based revenue. Audi also sold 114 R8s. Now assume every R8 sold was a “basic” $115,200 V8 coupe. From the R8, Audi would have taken in $13,018,800. Sounds tasty. Then again, Audi sold 1437 A5s. Even if all the 5s sold were standard A5s and not well-optioned S5s, Audi’s revenue from that product line totals $53,025,300.
A5/S5 sales fell 22.2% in April. Sales of the R8 shot up 178%. TT sales declined by six units. The R8 remains no match for the Porsche 911, up 65.8% in April, nor was it much competition for the suddenly reinvigorated $89,950 2012 Nissan GT-R, which posted a 143.4% year-over-year increase. As a whole, the Audi brand was up 7.5% as America’s sixth-ranked luxury brand. 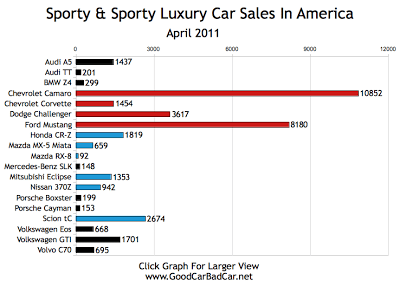 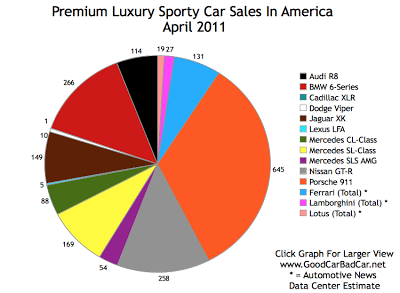