Forget what this means for Honda’s hybrid reputation – Toyota Prius sales were 11,394 in September – and pay attention to what this may do for Honda’s dwindling sporting reputation. The Prelude is dead, so is the S2000, and Honda’s luxury division stopped selling the Acura RSX a while ago. The CR-Z is nowhere near as sporty as those cars, but as the modern alternative to the Honda CRX, the CR-Z sends a signal that Honda could…. could… be serious about making fun cars again. Just remember one thing, Honda’s dominance in the Graph below comes with ignorance of the 2010 Hyundai Genesis Coupe. Hyundai sold 3230 Genesis coupes and sedans in September, the breakdown isn’t known.
What’s with the Audi R8 vs Audi TT conundrum? The TT, Audi’s volume-oriented BMW Z4 rival, was about as frequent a sale in September as the Zune. The Lamborghini-derived R8, now available as the V10-engined 2011 Audi R8 5.2, out-sold the TT by 20 units. Popular though the R8 is in its ultra-low volume segment, this ain’t normal. Year-to-date the TT has the R8 beaten by 792 sales.
Volvo’s C70 has also been relocated into the Sporty Car Sales chart, but not for its fast-growing sales. Year-to-date the C70 has posted a 15.1% decline; September 2010 Volvo C70 sales were down 8.4%. But declining sales were the order of the day at far more prestigious brands, too. Porsche 911 sales fell 55%. Combined Boxster/Cayman sales were down 34.4%. Sales of the usually much-loved Mercedes-Benz SL-Class dropped 44.7%. A new BMW 6-Series is on its way, a fact which partially explains the 6-Series’ September sales drop of 88.8%. 6-Series sales are down by 805 units year-to-date.
Details, as always, are in the Graphs below. 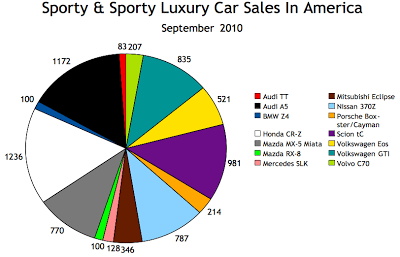 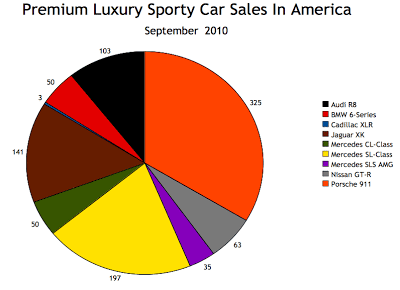