Regardless of what analysts and critics expected, the 2011 Honda CR-Z is not a flop. How it will be remembered remains to be seen, but the CR-Z is finding buyers, particularly south of the border. Although out-sold by vehicles as varied as the Audi A5 and Hyundai Genesis Coupe, the CR-Z easily handled the Mitsubishi Eclipse and Mazda Miata. Potential CR-Z buyers could be driving anything from the Eclipse to the Volkswagen GTI or perhaps have found themselves disappointed with their Honda Insight. It’s hard to nail down the cross-shopping tendencies of coupe buyers.

Talk about slowing sales: autumn in Canada is not the season for purchasing German luxo-coupes and roadsters. Audi TT sales fell from 45 in August to 22 in September 2010. The handsome BMW Z4 suffered a drop from 35 to 12. Combined sales of the Porsche Boxster and Cayman went from 9 to 7. Even the hot-selling Audi A5 and its hot-engined S5 sibling fell from August 2010’s 196 to 140 last month. Of the lot, only the Mercedes-Benz SLK remained at par with August, but SLK sales did drop ever-so-slightly from September 2009. TT, A5, Z4, and Boxster/Cayman sales were down compared with the same period of 2009, too.

The Nissan GT-R appears to have had its day, at least in a market which lacks the number of individuals with the type of income to support level long-term sales. September 2010 sales of the twin-turbocharged, all-wheel drive Japanese monster were down 70%. Through the first three quarters of 2010 Nissan GT-R sales are half what they were in 2009. GT-R sales slid 3% in 2009, as well. It’s actually kind of hard to use the “small market, not enough long-term potential” excuse on Nissan Canada since sales of cars like the Audi R8, Porsche 911, Jaguar XK, Mercedes-Benz’s SL/SLS AMG duo are either up on 2009 levels or nearly level. 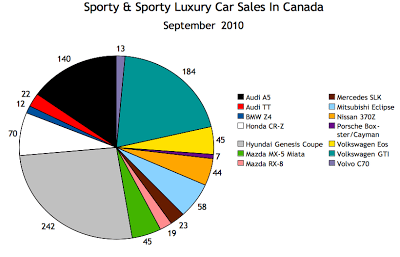 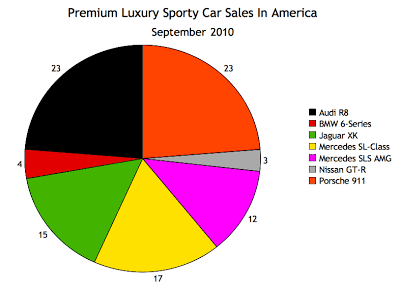