The Ford Mustang was way out in front of other sporty cars in Canadian sales volume in May 2011, but sales of the ‘Stang were down 16.6% year-over-year. Mustang sales in Canada are down 9.5% this year. The Chevrolet Camaro, Dodge Challenger, and Chevrolet Corvette have also suffered sales declines through the first five months of 2011. 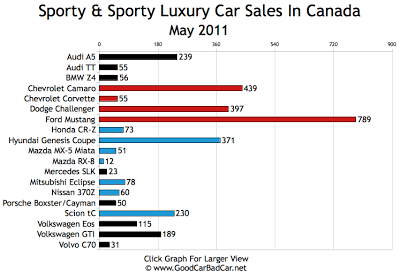 BMW 6-Series sales were weak last year, so it’s not surprising to see a huge percentage gain of 211% in May’s data. But 28 sales is still a good result for the 6-Series in the small Canadian market, tying the Mercedes-Benz SL-Class and beating the R8, Jaguar XK, and Nissan GT-R. The always-dominant Porsche 911 was up by one unit to 77 sales. 911 sales are down 16.5% in 2011. The oldest Porsche model continues to be more popular than the Panamera but isn’t as popular as the Cayenne, sales of which reached 33 and 149, respectively, in May. 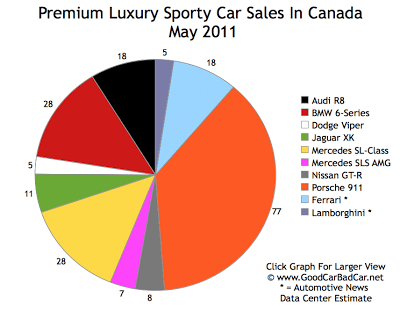