The Hyundai Genesis Coupe is not as popular as the Ford Mustang. Or the Chevrolet Camaro. But Canadians like it more than any other sporting coupe, at least based on June 2011’s sales data. Year-to-date, the Genesis Coupe trails the Dodge Challenger by a couple hundred units, as well.

The only other coupe close to this quartet in June 2011 was the Scion tC, sales of which rose 22% from May – there are no comparable year-over-year figures available for the tC – to an impressive 281. Two Germans, the Audi A5 and Volkswagen GTI, were behind the tC by 92 and 126 units, respectively.

Not visible on this list are sporty derivatives like the BMW 3-Series coupe, Honda Civic Si coupe, and a handful of others. We do know that Lexus ISC sales fell 33% to 29, however. And on that note, sales of the Lexus ISF rose 20% to 12. 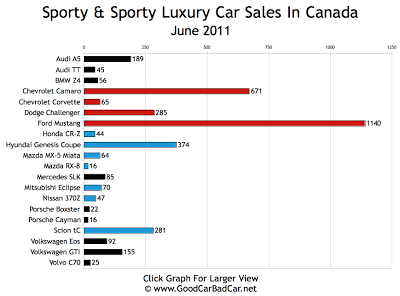 Porsche 911 sales continue to be very, very healthy in Canada. Up 82% in June (down 8% from May), the 911 easily out-sold less-expensive nameplates like the Mazda MX-5 Miata, Honda CR-Z, and Nissan 370Z. Add up the sales figures owned by the Audi R8, BMW 6-Series, Dodge Viper, Jaguar XK, and Mercedes-Benz SL-Class and the Porsche 911 was still more popular last month.
19 of the 71 911s sold by Porsche Canada in June were Turbos. Seven of those 19 were Turbo Cabriolets. 911 sales are down 5% so far this year, but Porsche has reported six record months this year, and a new 911 isn’t far off. 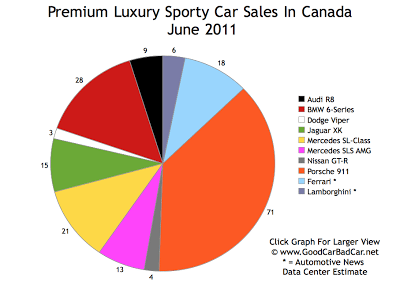