Studying sports car sales in America, or any market for that matter, is like tracking the stock market pre and post-recession. Fluctuations are the name of the game. While that’s not to say there isn’t any consistency (three American muscle cars almost always dominate), sales do rise and fall with the tides.

So at first glance the Honda CR-Z’s volume appears relatively healthy. Then you realize that – although the CR-Z more than doubled up on the Mazda MX-5 Miata and ventured close to the Volkswagen GTI – it wasn’t as popular as the Mitsubishi Eclipse and barely saw off the Chevrolet Corvette. Sales of the $49,045-$110,300 Chevy were down in May but are up 13% year-to-date. Honda CR-Z sales, by the way, were at 1819 in April, 1685 in March, 1091 in February, and 894 in January. 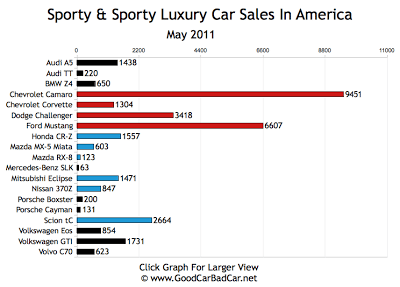 Audi sports car sales were certainly healthy in May 2011. Sales of the still-gorgeous TT were up 30.2% while sales of the overpowering R8 jumped 135.7%. 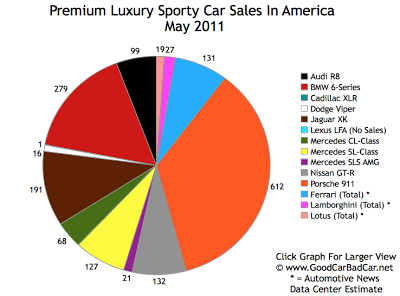