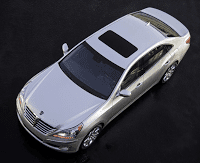 For all the reasons not to buy a 2011 BMW 3-Series (ubiquity, fussy styling, cost) there are plenty of good reasons to sign on the dotted line at a BMW dealership and drive away in a 323i, 328i, 335i or any of the countless variations. 14,009 Canadian buyers felt good enough about those good reasons in 2010 to drive away in a 3-Series, a figure which is up 11% from 2009. Mercedes-Benz C-Class sales rose 11%, as well, and Infiniti G sales were up 10%. Failing to perform at or above 2009 levels were excellent small luxury vehicles like the BMW 1-Series (down 30%), Volvo C30 (down 17%), and Lexus IS (down 15%). Combined sales of the low-volume Volvo quartet, Lexus duo, Acura pair, and the Infiniti G don’t add up to a figure large enough to even match the 3-Series’ utter domination.

In 2010, Mercedes-Benz’s market share in the midsize luxury segment was an impressive 22.8%. As mentioned a few minutes ago in the December 2010 version of this post, it’s hard to nail down exactly which cars belong in certain luxury segments, the midsize car category especially. Still, grabbing more than a fifth of the market when there are at least twelve rivals isn’t bad at all. 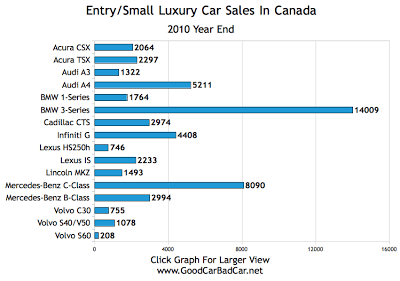 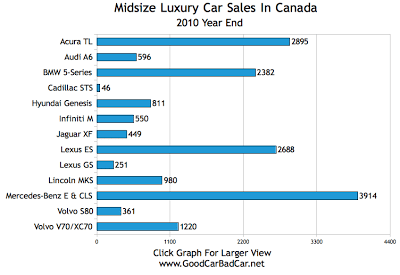