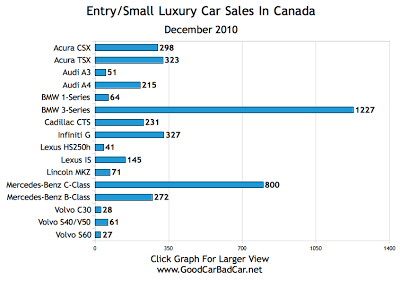 Home
All Vehicle Rankings
Entry Luxury Car Sales
As the BMW 3-Series took off at the end of the year and became one of Canada’s ten best-selling cars both in November and in December, other luxury players were left in the dust. It’s not as though the Mercedes-Benz C-Class was found wanting in December 2010, it’s just that the 3-Series and all its derivatives were simply popular on an immense level. This was actually the C-Class Benz’s best month of selling in Canada since May as sales of the handsome C jumped 76% from December 2009.

Infiniti G sales were up 40%, no doubt assisted by the introduction of the 2011 Infiniti G25 to the market. The Acura TSX was up 113%. This despite the absence of the Acura TSX Sport Wagon on Canadian shores, a strange choice made by Honda Canada for a market that typically favours wagons more than neighbours to the south.

Speaking of wagons, the 2011 Mercedes-Benz E350 4Matic Wagon starts at $66,900 in Canada. Mercedes-Benz doesn’t provide a split of sales data of the four bodystyles (and the CLS-Class), but Mercedes-Benz Canada was the overall best-selling luxury brand in the country in December, the E-Class being a major part of that victory. One would expect the 2012 Audi A6 to make gains in the Midsize Luxury Car sector in 2011 – A6 sales were down 34% to a trivial 23 in December. Lay only so much blame at Audi’s feet, however. Although the segment’s borders are tough to nail down, if taken the way The Good Car Guy presents it in the Graph below, nearly 70% of the market share is consumed by three lines from Mercedes-Benz, BMW, and Acura. 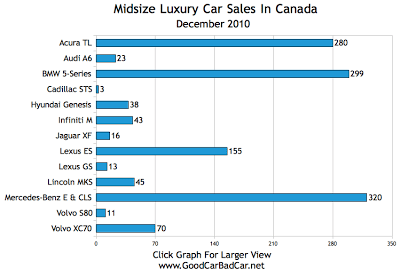