Combined, the Audi A6, Hyundai Equus, Hyundai Genesis sedan, Infiniti M, Jaguar XF, Lexus GS, Lincoln MKS, Saab 9-5, Volvo S80, and Volvo XC70 weren’t as popular in Canada in March 2011 as the BMW 5-Series. Those ten cars didn’t accumulate as many sales as Mercedes-Benz did with the E-Class and CLS-Class, either. 5-Series sales shot up 106% in March; sales of the E/CLS duo were up 19%.

With five available bodystyles it perhaps isn’t all that surprising that the E-Class does so well, but it’s to Mercedes-Benz’s credit that the company has seen a market for a midsize sedan, wagon, coupe, cabriolet, and rakish coupe-like sedan and then conquered that market by flooding it with every option known to mankind. The sedan and ugly hatchback Munich make available to North Americans currently start with the $53,900 2011 BMW 528i and top out with the $79,900 2011 BMW 550i xDrive Gran Turismo. A terribly pricy M5 based on the F10 5-Series is coming. The Benz range goes from the $59,900 E350 Coupe through to the $106,900 E63 AMG and finally the $126,000 CLS63 AMG.

Mercedes-Benz Canada will have more challenging opposition once BMW finishes off-loading current 3-Series sedans in favour of the yet-to-be-revaled F30 3-Series. Even now, the 3-Series remains a major player. It was 2010’s best-selling luxury vehicle in Canada and came out ahead of the C-Class as recently as February. 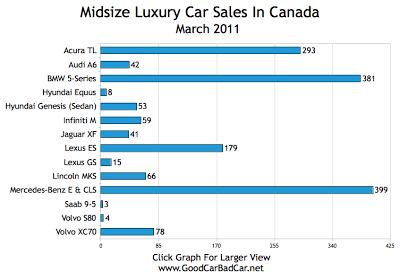 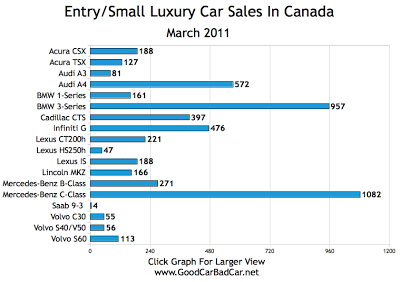