Arguably the three most famous small luxury nameplates, the BMW 3-Series, Audi A4, and Mercedes-Benz C-Class were also Canada’s three best-selling small luxury cars in April 2011. Though they moved around a bit from March, true change came down the line where the Infiniti G25/G37 lost hold of fourth place after the tall hatchback Benz B-Class and Cadillac CTS moved up. Infiniti G sales slid 13 units to 306. Sales of the B200 and B200 Turbo shot up 53%. Cadillac found 36 more CTS buyers than in April 2010.

Over at Volvo, sales remain low but are climbing. The gorgeous C30 hatch posted a 78% improvement. The redone S60’s 167 sales more than made up for the loss of 97 sales in the S40/V50 range. Based on looks alone, we can expect the Volvo V60 to be a moderate hit when if it reaches North American shores. 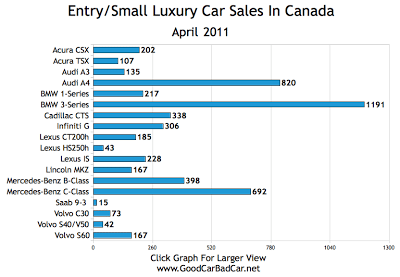 Mercedes-Benz and BMW are dominant players with larger luxury sedans, as well. The E-Class (and CLS tag-along) posted slight gains in April; the BMW 5-Series was up 55%. At Audi, the usually unnoticed A6 now has a familial rival in the $68,600 2012 Audi A7. In its first month of Canadian sales, the big-grilled hatchback A7 out-sold the A6 by 15 units as A6 sales fell 47%. The new 2012 A6 could fight back, but no matter how good the A6 has been in the past, it never held much sway in North America.
The gigantic Hyundai Equus (included in the midsize Graph on pricing grounds) found seven Canadian buyers in April. Sales of the Genesis sedan plummeted 55% year-over-year. 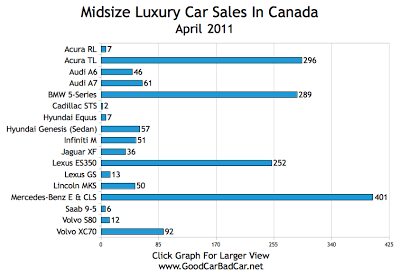