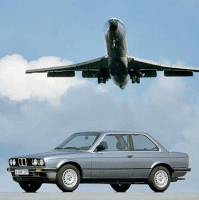 It seems as though almost every month GoodCarBadCar.net is lauding the BMW 3-Series after Sales Stats revealed the BMW’s domination in one country or another. So this month, let’s just stick with one fact. If the BMW’s closest competitor, the Mercedes-Benz C-Class, was ever going to overtake the 3-Series in November 2010, Mercedes-Benz would have needed to sell the C-Class more than twice as often. Back in May, the C-Class was within striking distance.

Bumped up in price and size (generally speaking), the midsize luxury car segment recently became more competitive with the advent of the new 2011 BMW 5-Series. As was the case in the United States, the BMW took over from the Mercedes-Benz E-Class, a difficult but unsurprising feat. On a less impressive note, Cadillac STS sales fell 40% to 3. Yep, 3. As in 3 sales. 3 people in Canada acquired a new Cadillac STS in November. That takes Cadillac’s total up to 43 for the first 11 months of 2010, down from 69 in 2009. 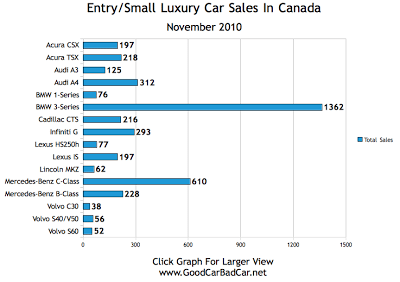 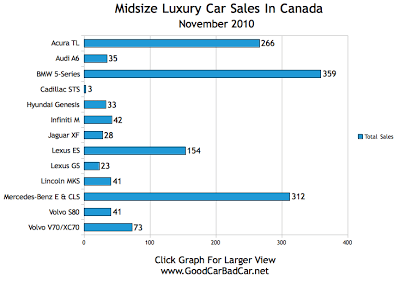