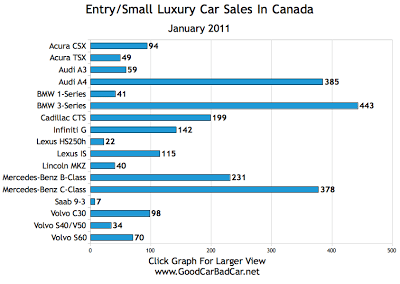 Home
All Vehicle Rankings
Entry Luxury Car Sales
After months of dominating sales performances, the BMW 3-Series finally faced a dip in Canada in January 2011. Oh, and what a dip. Sales fell from 448 to 443, a 1.1% drop that pales in comparison to the Infiniti G’s 38% drop. Even as many small and midsize mainstream cars faced seriously declining sales in January (the Honda Civic was down 51.1%) most smallerish luxury cars remained just about level. Even with falling sales, the BMW 3-Series saw off pretenders from Audi and Lexus who sought its luxury vehicle throne. Sales of the Audi A4 jumped 23.4%; Lexus RX sales dropped 20.4% to 425.

Midsize luxury volume in Canada has always been and will remain small. For every midsize luxury car sold in Canada in January, Ford sold more than four Escape small SUVs. Most midsize luxury sedan nameplates amount to next-to-nothing in terms of overall sales: the BMW 5-Series, Lexus ES, and Mercedes-Benz E/CLS-Class tandem (Mercedes-Benz Canada releases sales info for those two together) combined to hold 60% of the midsize luxury car market. On another note, fans of Hyundai’s luxury car market infiltration will be disappointed to learn that Genesis sedan sales fell 62.1% compared with January 2010. Why is the gigantic 2011 Hyundai Equus listed with the midsizers? Well, for starters, what makes one car a rival of another generally isn’t size alone. Besides, it’s still hard to see the otherwise excellent Equus as a genuine Mercedes-Benz S-Class alternative for most potential S550 buyers.

Finally, Saab returns. To great fanfare. Or not. We’ll go with not. The Dutch-owned Swedish automaker sold 11 cars in Canada in January, only four of which were examples of the new and kind of nice 2011 Saab 9-5. Bring on the 9-4X. 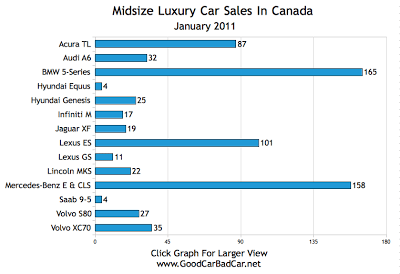