BMW’s good months earlier in the year haven’t exactly meant a slowing of 3-Series sales late in 2010. Up 10.8% now through the end of November, last month’s sales alone rose 2390 units from 6538 in November 2009. GoodCarBadCar.net’s post on German luxury vehicle market share in America will help you see just how strong the 3-Series, Audi A4, and Mercedes-Benz C-Class were in November.

BMW’s nearest competitor in the smaller/lesser/entry luxury car sector was the Infiniti G. Now with three bodystyles, two engines, and an IPL G Coupe, the Infiniti couldn’t put up half as many sales as the almighty 3-Series. Infiniti G sales, however, did increase 22.8% in November. Cadillac CTS sales were up 27.8%. C-Class Benz sales were down ever-so-slightly. Audi A4 sales were up 9%; the Audi S4 made up 14.3% of A4 family sales.

In the bigger luxury car segment, the Mercedes-Benz E-Class ceded the crown to the new 2011 BMW 5-Series. More attractive than the last-generation 5-Series, the new car posted a 76.4% improvement over two months ago, 58% up on November 2009. 5-Series sales are down slightly compared with last year as the outgoing model fizzled in the marketplace. 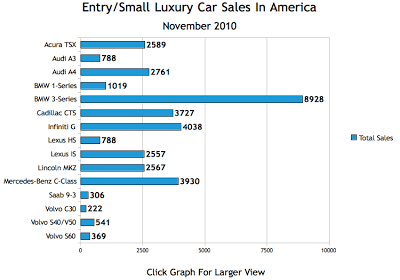 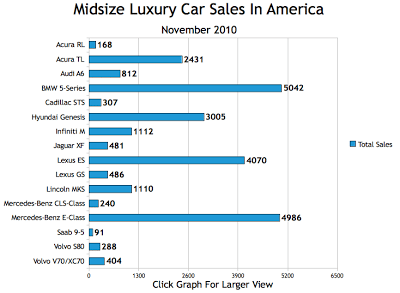