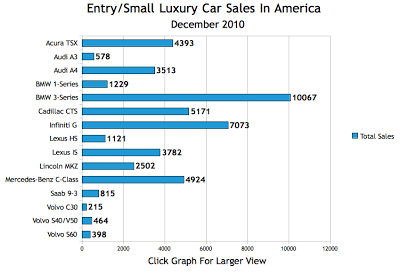 Home
All Vehicle Rankings
Entry Luxury Car Sales
Thanks in small part to a new wagon version, Acura TSX sales were up 55.7% in December. But the 1467-unit bump from December 2009 includes just 126 wagons, so Acura clearly found a way to seriously improve TSX sedan sales, as well.

Another vehicle nameplate with a new model helping out the percentage gains was the Infiniti G. The 2011 Infiniti G25, a member of 2011’s The Good 12, helped boost G sedan sales from 3541 to 5596 in December. The sedan share alone tops the G’s overall total from last year. When the G37 coupe’s 1477 sales are added into the mix, Infiniti G sales were up 37% from last December.

December 2010 sales figures may be interesting, but the 2010 Year End versions of these two Graphs will be out soon. 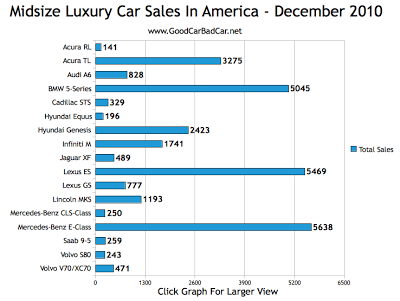