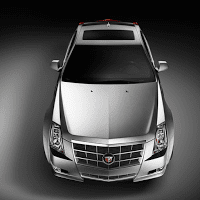 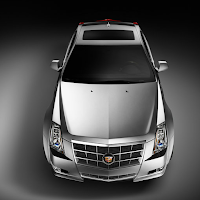 It remains difficult for Saab to convince U.S. buyers that the 2011 9-5 is a viable midsize luxury sedan option. Only 52 were sold in February. While that’s up significantly from the… ahem… zero Saab sold last year, keep in mind that Saab wasn’t always such a dreadfully low-volume brand: in February 2003 Saab sold 958 9-5s.

Needless to say, Saab isn’t the only premium brand that’s barely engaged in the selling of midsize luxury cars. Down 28.5%, the Lexus GS’s unpopular nature partly explains why Lexus fell behind Cadillac and Buick in overall sales in February. A 52% drop in Lincoln MKS sales doesn’t see the MKS fall below the Cadillac STS or Volvo S80 or Lexus GS, but you’ve got to wonder about any product suffering from cut-in-half sales when the passenger car market climbs 21.8%. (Despite its otherworldly size, the 2011 Hyundai Equus is still displayed in the midsize chart. Dimensions aren’t everything, and The Good Car Guy just can’t see the $58,000 Equus competing with the $93,000 Mercedes-Benz S550 when the E550 starts at $57,100. Then again, price isn’t everything either.)

The smallerish luxury car market enjoyed quite a shakeup in February 2011. Taking over top spot was… drum roll… the Cadillac CTS. Cadillac, say whaaa? CTS sales jumped from 2690 to 6033 in February 2011, out-pacing the Infiniti G and its youthful and inexpensive new G25 iteration as well as the BMW 3-Series, normally considered unbeatable. 3-Series sales in February 2010 stood at 6817. Saab is faring slightly better with its 9-3 than the 9-5, yet even as recently as February 2004 Saab sold 2139 9-3s.

If only wagons could turn the tide. The 2012 Saab 9-5 SportWagon is about as good-looking as midsize luxury cars get. 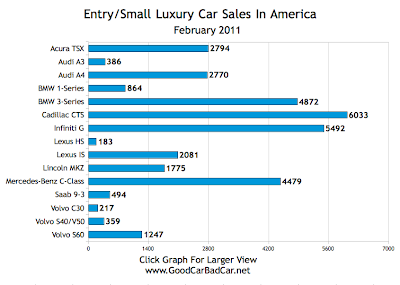 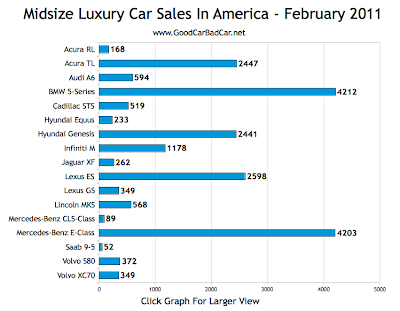