Toyota’s turmoil, as The Good Car Guy has officially labelled it, hasn’t stripped the Toyota Tacoma of its hold on the small pickup truck segment. The General Motors duo, when combined with the Dodge Dakota and the Ford Ranger, would still form a smaller chunk of the pie than the Toyota Tacoma.
Indeed, Toyota Tacoma sales were slightly up on an albeit terrible February/2008. While this February 2010 Sales Graph is just an added bonus for Sales Stats addicts, it’s really here so we can have a proper understanding of the disintegrating nature of the small pickup truck segment. Ford F-Series sales in February nearly reached 33,000. The Chevrolet Silverado came close to 20,000. In other words, the Ford F-Series out-sold the whole small pickup truck category. So did the Chevrolet Silverado. Yowch. 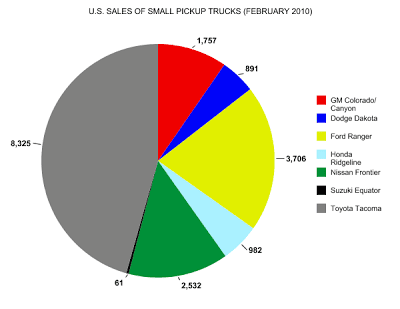