Other than the fact that the Ford Escape, even without help from the Mercury Mariner and Mazda Tribute, beats all other entrants and actually became America’s best-selling overall SUV in April, the most astounding fact from April’s Small SUV Sales Graph is the continued excellence of the 2011 Kia Sorento. The Sorento is an inexpensive SUV with just a bit more umph in its stature than most other vehicles in the chart. That it sold well initially wasn’t a surprise, that it’s continuing to sell well shouldn’t surprise either, given its merits. But a Kia SUV in the Top 10 Best-Selling SUVs In America group? Few saw that one comin’.
Grouping these vehicles in a pie chart was no longer feasible as GoodCarBadCar.net’s move towards Sales Stats publishing dominance requires a completely thorough approach. This means more vehicles included. For April, this means a stretch to the oft-derided Jeep Compass and Jeep Patriot.
So, who wants to go off-roading? Ha, nobody driving any of these vehicles. Instead, let’s just check out the Graph. 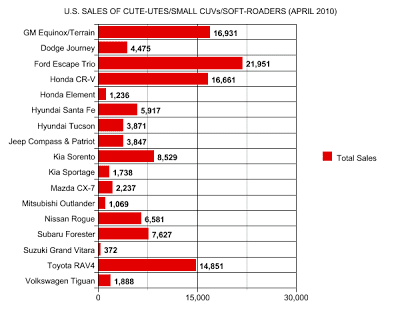