That question poses another interesting question. The Volkswagen Tiguan has a base price around $2,000 more than best sellers like the Ford Escape and Honda CR-V, more than $4,000 higher than the trendy Hyundai Tucson. Not nearly large enough to compete with vehicles like the more expensive Honda Pilot or Toyota Highlander, the VW Tiguan is stuck between a rock and a hard place: too expensive for the crowd with which it’s similarly sized; too small for the crowd with which it’s more similarly priced. The end result is dreadfully low sales. Could the Tiguan also benefit from a significant price drop?

Nearly nine Honda CR-Vs were sold in America every time somebody purchased a Volkswagen Tiguan last month. What’s worse, unfavoured vehicles like the Dodge Journey and Kia Sportage sell at a greater clip. Volkswagen was late to the game and the German conglomerate is now paying the price. The Ford Escape, clearly the most popular cute-ute in 2010, has been around for a decade. The Volkswagen Tiguan, on the other hand, came around more than a decade after the Honda CR-V debuted. 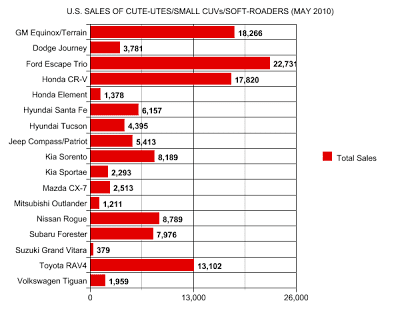