In the loosely defined mainstream midsize SUV category General Motors is a far greater force in the U.S. than in Canada. In the Graph below – a Graph filled with many vehicles that don’t compete with another, mind you – GM market share stands at just 13.2%. Compare that with the equivalent U.S. chart and you’ll see a huge difference: GM market share in the category was 22.7% south of the border in February. Back to the Canadian story, have a look at Ford: despite faltering Edge and Flex sales, the new Explorer helped Ford remain dominant with 31.1% market share last month. 36.7% of the midsize SUVs in the chart below wear Japanese badges.

Way down below in the large volume small SUV category, a classification used mainly to signify pricing competitiveness, there were 19,975 vehicles sold in February 2011. That’s up from 18,275 in February 2010, an increase very attributable to the Dodge Journey’s 63.2% year-over-year increase. Speaking of Chrysler, their four least expensive utility vehicles made up 19.5% of all sales manifested in the small SUV chart below. 41.8% of all sales shown in the small SUV sales chart were from the Detroit Three. 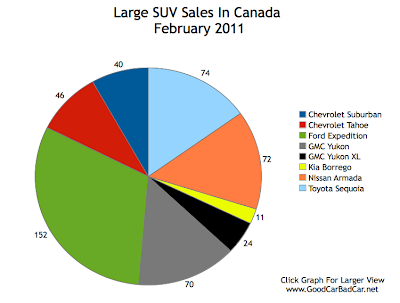 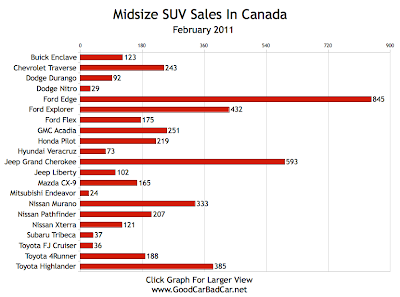 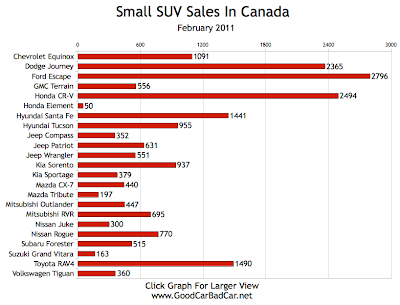