As was shown last week, more than one in four Canadian new vehicle sales in April 2011 were sport-utility vehicles or crossovers of some kind. Strangely, sales of the biggest and baddest mainstream SUVs jumped from 693 in April 2010 to 748 in April 2011. One would’ve assumed it was the other way around, and in many ways, one would be right. Sales of the Toyota Sequoia fell 18%. The Kia Borrego was down 71%. Chevrolet Tahoe sales were cut in half. Ford Expedition sales fell 35%. But the Nissan Armada, GMC Yukon, GMC Yukon XL, and Chevrolet Suburban all posted gains.

Most notably, Suburban sales jumped 246%. Canadian volumes in this category are small enough to see huge back-and-forth swings from one month to the next, so don’t go assuming Chevrolet can repeat this Suburban feat through the summer. 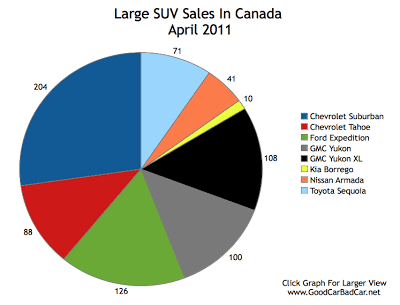 GM’s slightly smaller, more car-like Suburban sibling, the Chevrolet Traverse, struggled to meet April 2010’s standards as sales fell 35% last month. While it’s always worth paying attention to the Ford Edge/Explorer/Flex trio (2426 total sales in April), the Jeep Grand Cherokee and Dodge Durango out-sold GM’s Lambda trio (Traverse/Enclave/Acadia) over the course of April’s 30 days.
The Grand Cherokee and new 2011 Dodge Durango have an identical starting price of $37,995. Ford’s Flex and Explorer each start at $29,999.The Chevrolet Traverse starts $2245 below the $38,090. The best-selling Ford Edge has a basic MSRP of $27,999. At $31,500, the Toyota’s Highlander is $3320 less than the Honda Pilot. Incentives dramatically skew these pricing schemes, but these numbers give an idea of the breakdown of Canada’s favourite midsize utility vehicles. 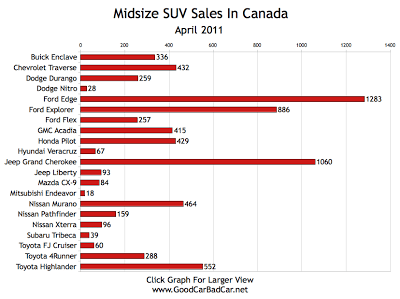 Canadians have long since figured out that there is plenty of space in smaller, less expensive utility vehicles like the $25,995 2011 Chevrolet Traverse, $24,299 2011 Hyundai Tucson GL, and now the $19,998 2011 Mitsubishi RVR, sales of which topped the handsome Kia Sportage and capable Subaru Forester in April. 69% of all SUV/CUV sales in Canada in April came from the vehicles you’ll see in the Graph below.
Yes, sales of the Mitsubishi RVR (Outlander Sport) are particularly strong in Canada. Though the overall U.S. market is a little more than seven times bigger, American sales of the RVR Outlander Sport aren’t even double what Mitsubishi Canada was able to accomplish with the RVR in April. But at what expense? Sales of the regular Mitsubishi Outlander fell 47% last month. True, the grand total has improved: in April 2010, total small crossover sales at Mitsubishi reached 657. In the same period of 2011, despite 350 fewer Outlander sales, total small crossover sales at Mitsubishi reached 1115. The RVR is chewing on food from the Outlander’s plate. An overall growth spurt, however, means Mitsubishi probably doesn’t care.
On another note, Mitsubishi sales climbed 13.2% in Canada in April despite falling sales of every model that was on sale at this time last year. Mitsubishi was the 18th-ranked auto brand in Canada. In the United States, Mitsubishi sales were up 123.8%, the brand was ranked 22nd, and gains in the U.S. came from the Eclipse Spyder, Lancer, Endeavor, and the Outlander Sport. 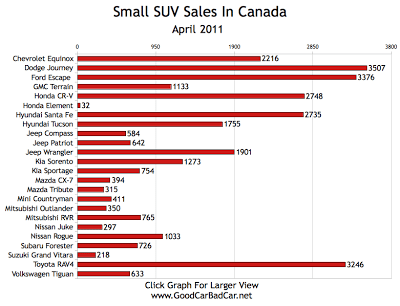