Thrown into a fire that’s already flaming with the surprisingly popular Mitsubishi RVR, rather successful Nissan Juke, and most of the best-selling SUVs in Canada, the 2011 Mini Countryman appears prematurely thwarted. Out-selling only one rival – the defunct Honda Element – isn’t terribly un-Mini-like, given the regular Cooper’s lackluster totals.

No, Mini makes plenty of money outfitting and accessorizing just one Countryman. There’s no need to sell thousands per month. Besides, the Countryman may be as much of an indirect rival for the larger and more expensive Audi Q5, upcoming BMW X1, or rumoured Mercedes-Benz GLC as it is for the mainstream Volkswagen Tiguan or Subaru Forester. Then again, the Volvo Acura RDX, Audi Q5, BMW X3, Infiniti EX35, Mercedes-Benz GLK, and Volvo XC60 all out-sold the Mini Countryman in Canada in March 2011.

As in the United States, the Ford Edge and Ford Explorer combined to be a magnificent force in March. The Edge out-sold all direct rivals; the Explorer out-sold all rivals save for the Edge. Speaking of U.S. sales, though the market south of the border was just eight times bigger than the Canadian market, Mini Countryman sales were 19 times stronger in the U.S. than in Canada.

Five of the jumbo sport-utility vehicles in the Graph below were (in a not at all direct manner) conquered by the Countryman in March. Perhaps it’s better to describe the situation this way: the lowest volume small utility vehicle sold in greater volume than all but two of the largest utility vehicles in Canada last month. 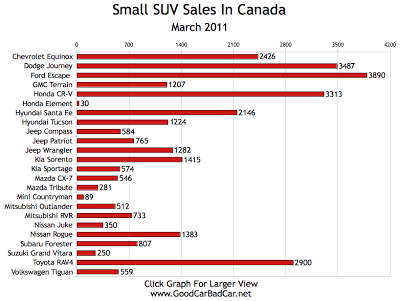 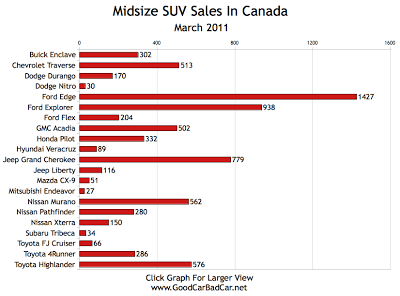 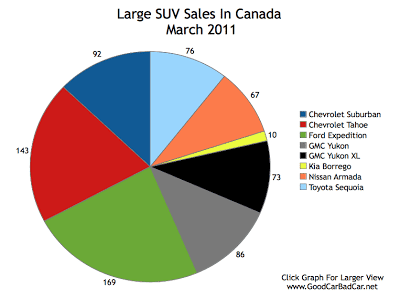