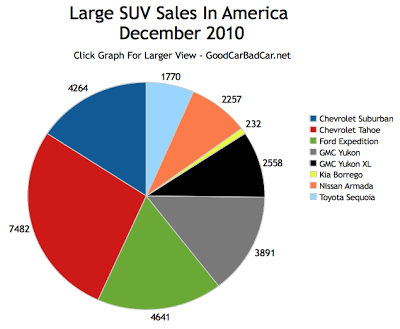 Home
All Vehicle Rankings
SUV Sales
Small SUV Sales
Without a doubt one of the most popular sport-utility vehicle nameplates of all time, the Chevrolet Suburban is certainly no best-seller. Even as the most hotly contested segments increasingly become smaller and more concentrated on fuel efficiency, the Chevrolet Suburban and its three GM cohorts continue to sell in hefty numbers.

Here, as you’ll see in the December 2010 chart below, the Suburban’s 9.4% drop from December 2009 was covered up by the GMC Yukon XL’s 31% increase. Chevy Tahoe sales fell, as well, but this was offset by the GMC Yukon’s 16.6% bump. General Motors sold 18,175 big SUVs through Chevrolet and GMC outlets in December. All other mainstream brands combined to sell just 8300. For the record, Nissan Armada sales were up 37.8% in December.

Amazingly, despite help from the 2011 Ford Explorer, Ford’s trio of utility vehicles couldn’t out-sell GM’s Lambda platform in December. With 23,670 sales, the Edge, Explorer, and Flex combined to climb 15% from December 2009’s total, but that fails to reflect the Explorer and Edge’s great gains. Ford Flex sales dropped 51% last month.

Smaller vehicles are where the true volume lies in non-luxury SUV sales. GM’s Equinox and Terrain twins out-sold the whole jumbo SUV market in December. America’s favourite utility vehicle, the Honda CR-V, was up 23.8% in December. Is size and fuel efficiency the only reason for the jumbo SUV’s downfall and the rise of vehicles like the CR-V and Toyota RAV4? Consider this: the 2011 Ford Expedition starts at $37,070. For $10,000 less, the 2011 Kia Sorento has a V6 and all-wheel drive. 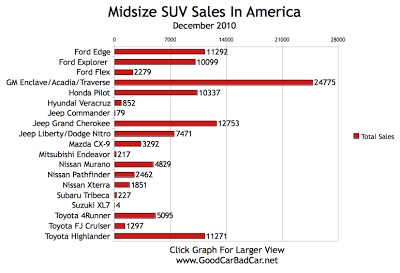 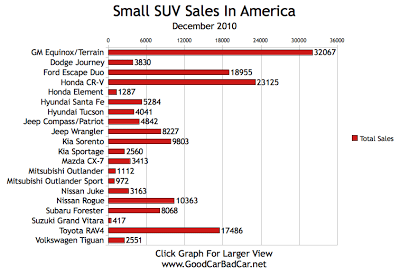