Now that they’re established models, the start of a real sales battle between the 2011 Nissan Juke and 2011 Mitsubishi Outlander Sport is underway with January 2011 sales data available in the chart below. And why not throw their indirect rival into the mix, as 2011 Mini Cooper Countryman sales info is up and ready. Nearly doubling up on the conventional Outlander, the Outlander Sport trailed the Juke by 2030 sales last month. The Countryman was another 379 units behind. Okay, maybe this won’t be much of a battle. You really ought to read The Good Car Guy’s Driven reviews of the Juke and the Mini Countryman.

On the more mainstream side of things, the less exciting but far more popular Honda CR-V walked away from friends and foes as the best-selling utility vehicle in America in January. Not too terribly far behind were other smallerish SUVs like the Ford Escape and Chevrolet Equinox. In the distance, (sixth, seventh, ninth, and tenth spots) were larger vehicles from Ford, Chevrolet, Jeep and Toyota. In fact, Toyota Highlander sales were up 67.6% in January. Note the separation of vehicles formerly shown together in GoodCarBadCar.net charts as well as the inclusion of the 2011 Dodge Durango.

Among the largest of sport-utility vehicles, only the Nissan Armada and Kia Borrego posted lower volumes in January 2011 than in January 2010. Borrego volume dropped by 85.4%. The General Motors foursome was up 13.9% to 11,150 total sales. 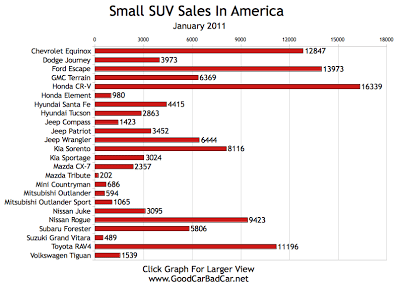 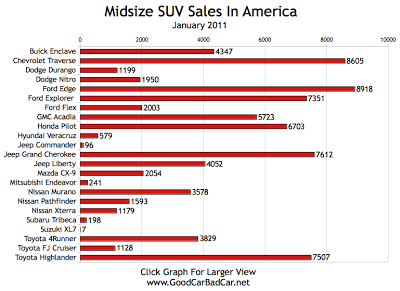 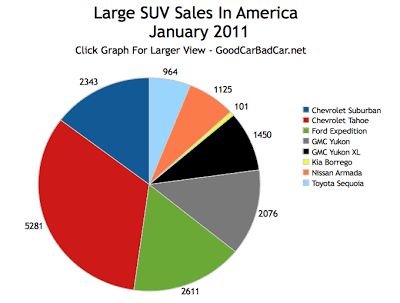