They are not rugged, not sporty, and not nearly as utilitarian as their predecessors, but that doesn’t stop so-called “sport-utility vehicles” like the Honda CR-V, Ford Escape, and Chevrolet Equinox from selling rapidly and frequently. Equinox sales improved by 91.5% in February. Escape sales were up 18.8%, some way below the U.S. light truck class’s 33.7% improvement. CR-V sales jumped 61.4%. These three vehicles were not only America’s favourite smallerish utility vehicles in February 2011, they were also the three best-selling utility vehicles overall, followed closely by the Toyota RAV4 and Nissan Rogue on the Best Sellers chart.

Don’t consider that to be all-out rejection of larger SUVs and crossovers. Seven “midsize” SUVs and CUVs topped the 7000 sale mountain in February, starting with the 2011 Ford Edge and ending with the GMC Acadia. Speaking of the Acadia, GM’s Lambda platform trio produced 22,279 sales in the second month of 2011 and have sold nearly 41,000 units so far in 2011. That’s up 30% from GM’s Lambda total in the first two months of 2010.

The largest of SUV segments is another General Motors stronghold. 67.9% of large mainstream SUVs sold in February, as shown in the pie chart below, were GM vehicles. Only 16.3% of large SUVs sold weren’t domestic products. The Chevrolet Tahoe led the way on gains of 52.4%.

One more thing: 3.7% of all small “SUV” sales – as if these three vehicles are ess-you-vees – were Nissan Jukes, Mitsubishi Outlander Sports, and Mini Countrymans. Or is it Countrymen? 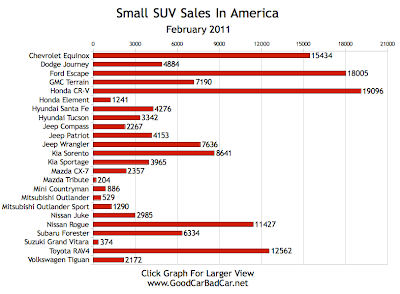 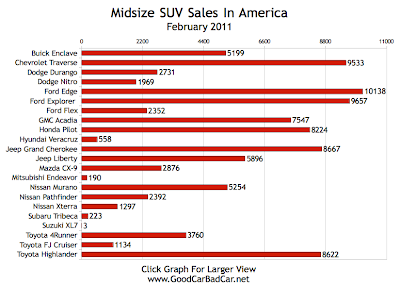 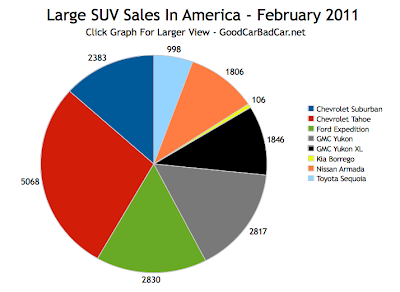