Offering just enough refinement to compete with fresher models, the 2011 Ford Escape can’t be considered the best small utility vehicle on sale today. Nevertheless, it was America’s best-selling small SUV in March on sales which rose 25% over March 2010’s total. Toyota RAV4 sales dropped 38%. The Chevrolet Equinox was up 17%, and Nissan Rogue sales soared upwards at a 69% clip. Combined, the Chevrolet Equinox and GMC Terrain would not quite measure up to America’s #2 utility vehicle, the $21,695 2011 Honda CR-V, sales of which jumped dramatically from the 14,848-unit showing in March of last year.

Among sometimes larger, generally more expensive “midsize” machines, the Blue Oval commanded attention utterly and completely in March. The Edge has been a bruising force for a while, but now with the 2011 Ford Explorer Ford was able to find 27,338 buyers for its middle-rung SUVs last month. Compare that with 19,547 sales for GM’s Lambda platform (Enclave, Traverse, Acadia) or 15,556 Toyota 4Runners, FJ Cruisers, and Highlanders.

Among Chrysler’s midsizers, the Jeep Grand Cherokee continues to post year-over-year improvements, up 64% in March. Sales of the new 2011 Dodge Durango grew from 2731 in February to 4392 in March, a 61% increase in a market which grew 25.5%.

Sadly, Kia Borrego sales plunged 89%. Don’t blame fuel prices for the Borrego’s decline. Along with the Expedition, sales of the other jumbo SUVs like the Nissan Armada, GMC Yukon, and Chevrolet Tahoe all increased compared with prior year figures. 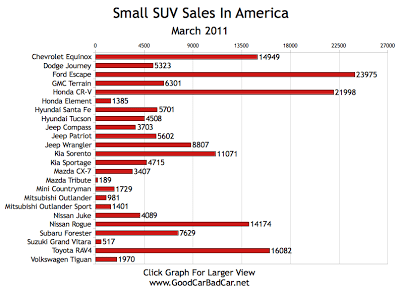 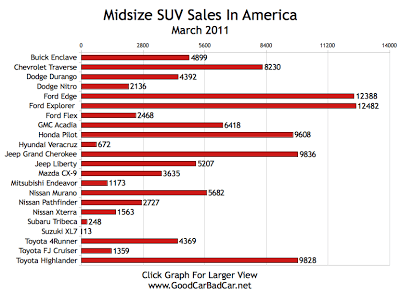 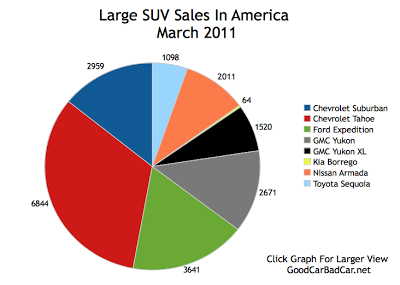